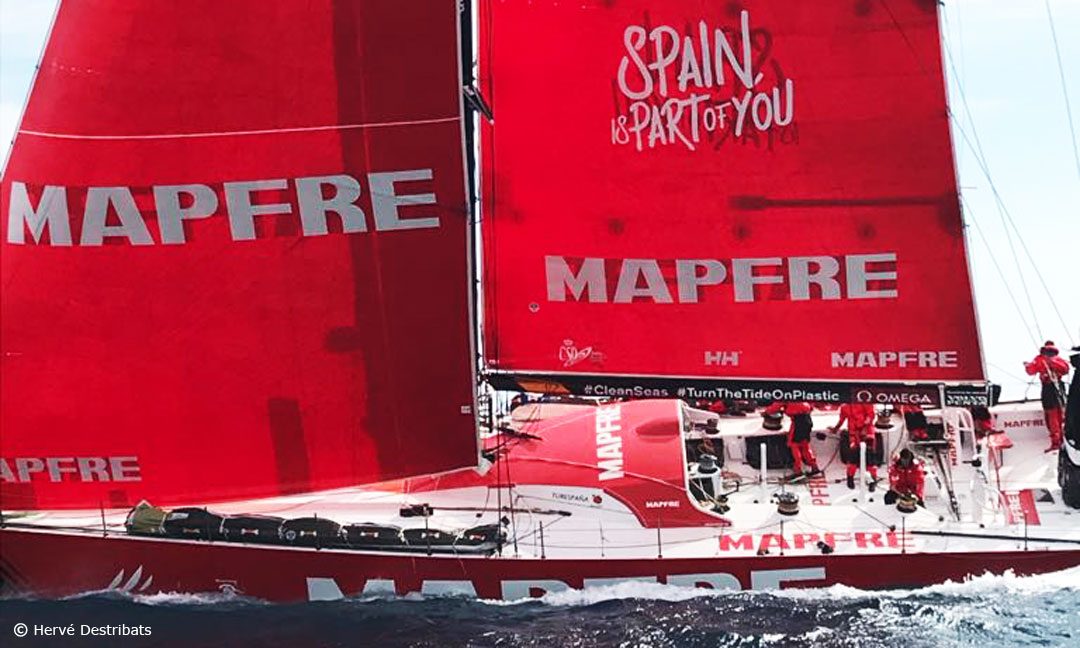 The King Emeritus, Juan Carlos I, arrived to the Race Village when it opened, to give support to the 69 sailors who set sail from the Port of Alicante to complete the great nautical adventure. Felipe VI and Letizia gave their support through Twitter.

“We are going to win this Volvo!” was the battle cry that was most heard the day before yesterday in the Race Village of the Volvo Ocean Race. It was the “red tide” of followers of the Spanish team Mapfre, who, at 10 in the morning, already flooded the enclosure of the port to assist to the departure of the sailing race around the world.

A real celebration in which more than 40,000 residents from Alicante and visitors encouraged the seven teams that are currently sailing towards Lisbon, the first stage of the ocean race, which began on Sunday in Alicante and will conclude in eight months in the Dutch city, The Hague.

In the Race Village, visitors experienced moments loaded with emotion. One of them was when the visitors saw the Emeritus King Juan Carlos on the terrace of the base of the Spanish team. To the cries of “Long live the King!“, His Majesty greeted the audience, who continued to cheer him.

The Emeritus King went to Alicante on a private visit and wanted to personally say goody to all the crews, whom he greeted from the departure pontoon, just before the fleet released moorings. His greeting was especially effusive for the members of the Spanish team, which in this edition is emerging as one of the favourites to win the race.

In respect of The Kings, they conveyed their support, wishing “great encouragement to the Spanish who begin today in Alicante the Volvo Ocean Race. 45,000 miles ahead! Our admiration for the effort” was the message of Don Felipe and Doña Letizia through the official Twitter account of the Casa del Rey (King’s House).

Another emotion-filled moment that was lived on Sunday in the Race Village was the crew parade, in which the sailors accompanied by their families, and many of them with their small children in arms, crossed the central walk towards their boats.

Kisses, hugs and also some tears and as “soundtrack” the songs of the ñetiFans. This group of relatives and friends of the Spanish sailing (prow), Antonio Cuevas-Mons (Ñeti) move every edition of the Volvo Ocean Race from Cantabria to Alicante, to say goodbye and his presence never goes unnoticed. The sister of Ñeti explained that this time the Spanish team has great chances to climb to the top of the podium and ensured that the support of the ÑetiFans will reach practically all ports of call of the race.

Within the program of the ceremony of farewell of the Volvo Ocean Race, the symbolic exchange of flags between the port of exit, Alicante, and the one of arrival of the first stage, Lisbon, was carried out. And then the Olympic athlete Alejandra Quereda and the basketball coach Pedro Ferrándiz, addressed the attendees wishing the best to the sailors.

Alejandra Quereda’s speech was especially endearing, and in it she spoke of respect, justice and solidarity and showed her pride that the name of Alicante and its values ​​go around the world.

Then the crews began to get on the ships after the embraces of their loved ones and with the King Juan Carlos on the pontoon wishing them a good journey. Finally, The Patrulla Águila del Ejercito del Aire (Eagle Air Force Patrol) paid their respect flying over the Port of Alicante, leaving in the sky the colours of the Spanish flag.

An event not to be missed

The Race Village of the Volvo Ocean Race offered on Sunday to visitors a real party. As soon as the gates opened, the visitors were received with the sound of the pasodobles of Villena Municipal Band. And during the whole day, the parades of Moors and Christians took place as well as choral performances. In addition, the pavilions of the teams remained open, as well as attractions and activities for children.

This information was initially published in the newspaper Información on 23rd of October. The photo is from Hervé Destribats.

We invite our readers to discover the program of this mythical race in the official website of the Volvo Ocean Race here.